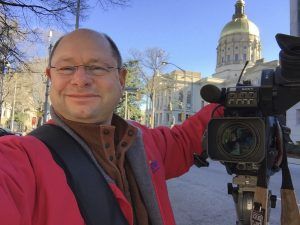 ATLANTA, GA (August 1, 2017) – A-1 Broadcast, one of the top broadcast public relations firms in the nation, has hired award-winning photojournalist Steve Flood to run its video operations and studio.

Flood is an accomplished photojournalist, editor, field producer and storyteller who is a past regional National Press Photographer Association (NPPA) Photographer of the Year. He has won 22 Emmy Awards during his 35-year career in broadcast news. Flood has also won multiple Associated Press and Georgia Broadcasters awards and is an Atlanta Press Club and Kentucky Photographer of the Year recipient. While chief photographer at WXIA-TV (NBC) in Atlanta, the station was named as a finalist for NPPA Station of the Year for three years.

“We are so proud and excited that Steve will be bringing his amazing skills to our company,” said Chuck Edmundson, CEO of A-1 Broadcast. “We believe that our clients will be thrilled with the skills Steve will bringing to their broadcast public relations projects.”

Flood will be managing Atlanta Broadcast Studio & Productions for A-1 Broadcast and the company’s nationally-syndicated show, Coffee with America. A-1 Broadcast has offices in New York, Chicago, Los Angeles and Atlanta, specializing in satellite media tours, radio media tours and corporate videos. Coffee with America is a lifestyle show providing a venue for major public relations firms. It is currently available on national cable and syndicated to 43 local network affiliates stations, including WNYW-TV (FOX) in New York and WAGA-TV (FOX) Atlanta.

Flood has also has also worked for ESPN, NBC, and various corporate clients.

Since 1982, Flood has been involved with daily news assignments, long format documentaries and numerous television special. After beginning his career in Louisville, KY he moved on to WXIA-TV in Atlanta, GA, where he was Chief Photojournalist for 15 years. Flood has been a frequent speaker or judge at TV news industry events, and he served as past television representative on the NPPA Board of Directors. He brings over 30 years of seasoned experience to his craft, and joins A-1 Broadcast with client solutions that raise the bar to tell their story. Steve’s favorite quote: “It’s not what you look at that matters, it’s what you see.”

COFFEE WITH AMERICA is a weekly show produced at Atlanta Broadcast Studio & Productions in Atlanta, Georgia.